The souks of Marrakech﻿ were a feast for the senses and a shoppers delight.  Leather, iron and tin work, silks, and textiles all worked by hand.  Artisians worked their craft and sold their goods in little shops no bigger than a US style walk-in closet.  These men were wonderfully talented and the craftmanship was at times exceptional.
I did get an sense of how hard a life these men live.  They work with toxic and caustic materials which leave them in an early grave.  Master tailors frequently go blind due to the years of strain on their eyes working elaborate embroidery.
Each work of art produced by these hard working men had elements of joy and tragedy. 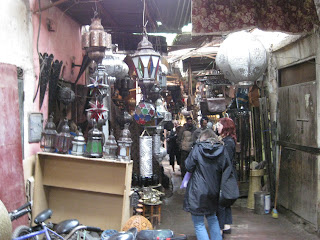 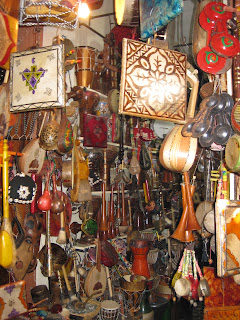 These photos were all taken in the souk surrounding the Medersa Ben Youssef, or in English, The Koran School.  Our guide said there were 3,500 artisian shops in this souk alone.  The winding dark alleys went on for miles.  It was the one place in the city I wish we had spent more time.
Posted by Philly Girl Abroad at 3:11 AM 3 comments: Links to this post

We were shocked and fascinated by this Moroccan food market.  Set in a small covered alley, each food stall offered something unique, sometimes something living waiting for slaughter!  There is no clean and tidy separation between the source of the food and the shopper here.

But as I thought about it, this market was completely Green:  no energy wasted on refrigeration or lighting, no plastic trash for disposal, and no carbon emmisions from long transport distances, this food most likely arrived by donkey cart.   It was food for thought. 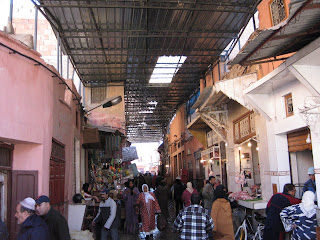 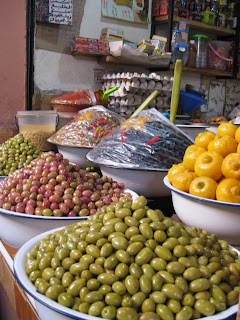 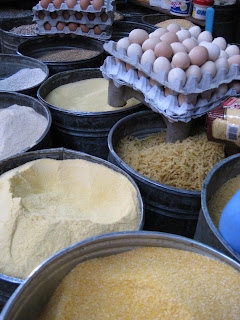 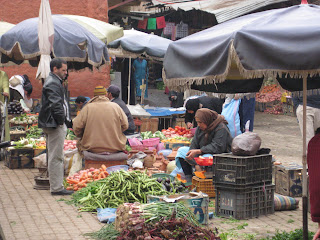 It was an eye opening experience for me, raised in the US, land of sterile grocery stores. I wonder how much meat I would eat each week if I had to pick out the animal for slaughter.  I think much less.  It was the kind of experience you only get from travel.
Posted by Philly Girl Abroad at 10:41 PM 1 comment: Links to this post

Marrakech (Part 2): The Call to Prayer 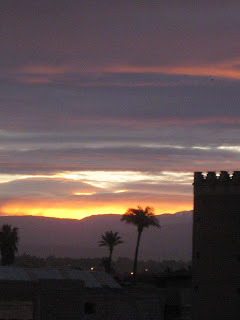 I could not sleep.

Although dawn was not far off, the darkness was almost complete in this medieval city.  The stars littered the sky outside my rooftop bedroom, calling to me. A slice of moon hung over the horizon so clear I thought I might touch it.

I wrapped myself in the thick blanket from my bed and climbed the stairs to the roof.

In my early rising, I disturbed Ishmael, the sweet tempered servant of my Riad. Unknown to me, he had been guarding my room by sleeping on the roof wearing only his coat for warmth. We startled one another.

Safely ensconced in a chair and wrapped in my quilt against the early morning chill, I watched the crystal clear stars glitter above me.

As the sun started to warm the colors of the night sky over the distant Atlas Mountains, the call to prayer began. Far away, the voice called in Arabic the ancient words, calling us, calling us, to follow the one true path. Soon there were more voices calling. For a full half an hour, the calls continued both near and far, swirling around me, filling the void of the night, reminding me to follow to the one true path.

As the calls to prayer ended another sound rose up from the streets, a humming, almost the sound of a bee hive, of ten thousand voices at prayer. In this place, the faithful begin each day reciting their sacred words, facing their holy city, each attempting to follow his one true path.

I wrapped the quilt closer around me, grateful for its warmth. The glow to the Eastern sky brought the colors of pink, purple and gold, driving back the night, extinguishing the stars one by one.

I savored every precious drop.
Posted by Philly Girl Abroad at 2:40 AM 2 comments: Links to this post

Last weekend eight friends and I went on a journey in search of something completely different.  We found ourselves in Marrakech and emersed ourselves in the culture and color of Morocco.

dJemma el Fna is a magical place.  The main square of Marrakech is a feast for the senses:  smells of animals and steaming dishes of lamb, the color of spice stalls, music from street performers, and dapples of light from lantern shops.  The experience was overwhelming and wonderful.  Here are a few of our photos from our visit there at dusk...
﻿﻿ 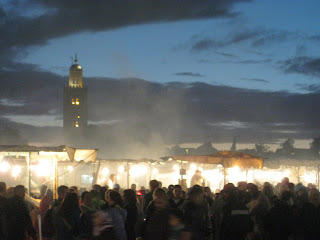 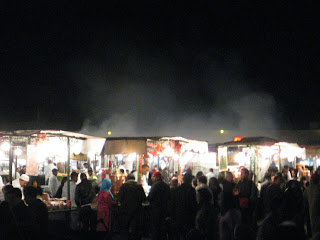 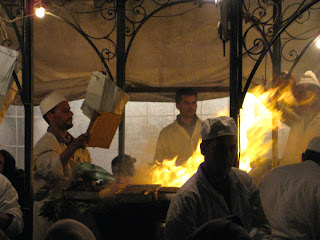 Our eyes were opened to a whole new culture during our visit to el Fna.  The exotic foods, the crush of the crowds, the narrative of the story tellers, the music of the snake charmer calling his cobra from a basket all combined to give us a brief look into another world.  We were both shocked and touched by what we experienced.

This is the first in a four part series on Marrakech.  I hope you enjoy!
Posted by Philly Girl Abroad at 6:58 AM 3 comments: Links to this post

I’ve been incommunicado. The kids were sick. Jordan became very sick. Days and weeks were spent worrying and visiting doctors. Walt started a crazy travel schedule. My sister came to visit for a glorious 10 days. Then I had some traveling to do of my own.

Although Walt is still traveling at a rate that leaves me a little blue, things should get easier from here.

I have much to write about. I hope to put pen to paper, or fingers to keyboard, over the next few weeks and open again the window to this crazy expat life.
Posted by Philly Girl Abroad at 6:15 AM 4 comments: Links to this post

Whine and Chocolate or The Great Ghent Christmas Disaster 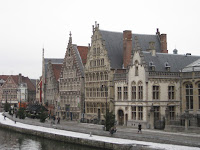 It’s hard to predict when they will embrace something, or when they will start marking the minutes until we return to the car and start the journey home.

Yesterday was a freak show.

Ghent is this lovely little Flemish city. It is filled with charming 16th century architecture, three rivers, medieval bridges, gothic churches, and art masterpieces. It was even rated one of Lonely Planet's Top 10 Cities to see in 2011.

I tried to sell this little Belgian daytrip to my kids by offering a trip to a castle, a climb of a historic tower, Belgian chocolate, and later, as my arguments fell on disinterested ears, french fries.

I knew we were in trouble when we had not even left the parking garage before Jack started asking how long it would be until we could go back home.

In their defense, it was cold: damp and cold.  But surely we should be able to see a few things? 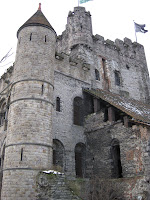 The castle Gravensteen is everything you’d want in a medieval structure. It was rough and ragged around the edges, “a Keep” Jack called it. It was built for defense, but later used as a prison.

Unlike the Tower of London, there were was no glossing over of the Gravensteen’s gory history here. They made it very clear that this place was used for torture and execution. They had a very informative display of torture devices, how long the torture could be endured, and which room was used for which application. When they started using life sized manikins to make their point, I had to get Audrey out of the room. They did have a cool guillotine complete with a burlap sack to catch the head. You don’t get an education like this every day. Any questions, kids?

The whole place made me glad that we live here and now when places like Gravensteen are museums and any form of capital punishment is debated, considered and reconsidered.

My kids, on the other hand, were wishing themselves dead.

The whining had been a background noise throughout the castle, but now we were back out on the street. The thought that we would just wander around the old city until we saw a few things was too much for Jack. He started to plan a mutiny. When Audrey started crying because her hands were cold, I thought it was time to pack it up and go home.

Thank God for Belgian chocolate. We ducked into a little shop called Van Hoorebeke on Sint Baafsplein. This Victorian chocolate shop had curved glass counters and shelves filled with fresh chocolates. The aroma from the kitchen below was absolutely divine. While Audrey warmed up, Jack and Jordan made selections from the counter. For five euros in chocolate, I had bought myself some time.

We ventured in to the Gothic church of St. Bavo, where I had heard the Flemish masterpiece “Adoration of the Mystic Lamb” had recently been restored. Access to the side chapel with the “Adoration” was four euros per person. I approached Walt and made my pitch. “Walt, there is a very famous early Flemish masterpiece here. It’s four euros to see it.” I watched Walt’s eyes glass over as I spoke.

There is an advantage to 15 years of marriage. You tend to be able to read your partner. I changed my tact and offered, “We could pay that four euros, or I could show you pictures of it on-line when we get home.” Walt broke into a large grin and we moved on.

If you’ve seen the “Adoration” by the van Eyck brothers, let me know if it was worth the money. I’m dying to know.

So that was our afternoon. The kids outright refused a trip up the belfry of the Cloth Hall, a world heritage site. We spent a few minutes at the merry-go-round. Then it was time to pack the kids up and head home. Jack smiled for the first time that afternoon.

Later, I had an interesting conversation with the kids about what kind of travel they like to do. They agreed that all trips should involve an amusement park with roller coasters, oh, and lots of kitty cats.

I think Flemish and Dutch Medieval cities are done for while. Too bad considering that there are about 50 amazing cities just like that around here. Sigh…
Posted by Philly Girl Abroad at 11:57 PM 5 comments: Links to this post

Northern Europe has been paralyzed with snow.  Here are some pictures of our village this morning.  We've gotten about 8 in. (20 cm) of snow since Friday.  I'm so grateful that Walt was able to fly in from Africa Friday before the snow and we are all happily snowed in together. 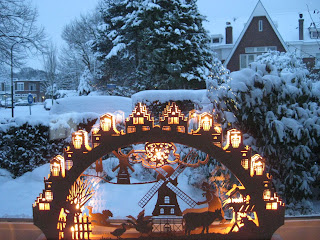 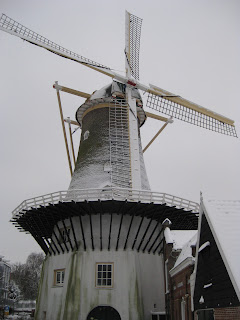 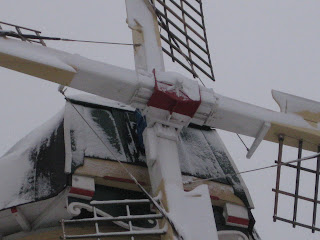 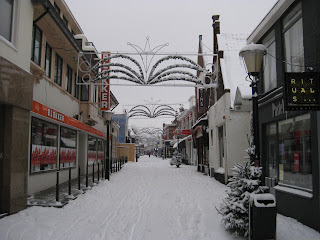 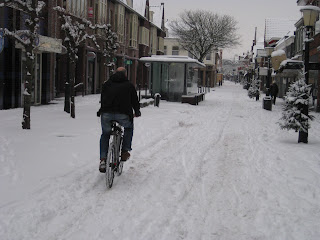 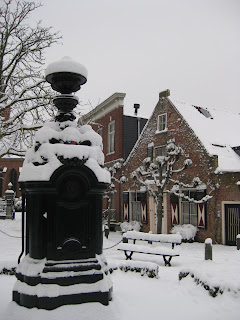 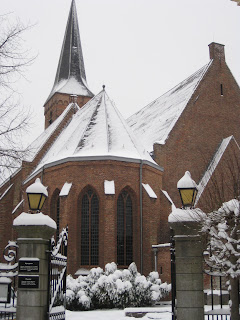 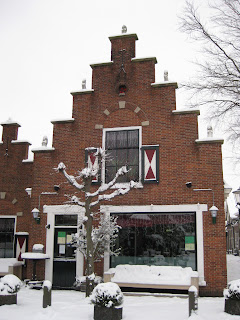 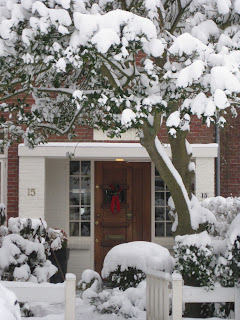 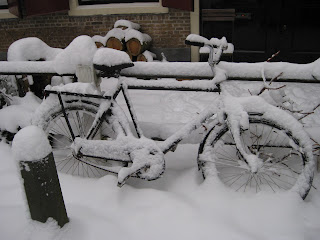 Since no one here plows or shovels, the roads are fit only for pull sleds.  I'm asking Santa for two ponies and a sleigh for Christmas.
Merry Christmas, Everyone!
Posted by Philly Girl Abroad at 2:57 AM 5 comments: Links to this post

Philly Girl Abroad
I'm a Philadelphia native plucked out of West Chester, Pennsylvania and dropped in The Netherlands with my husband and three kids. I'm learning more about traveling with kids, Europe, and myself one adventure at a time.

Those who once and maybe sometimes read my blog